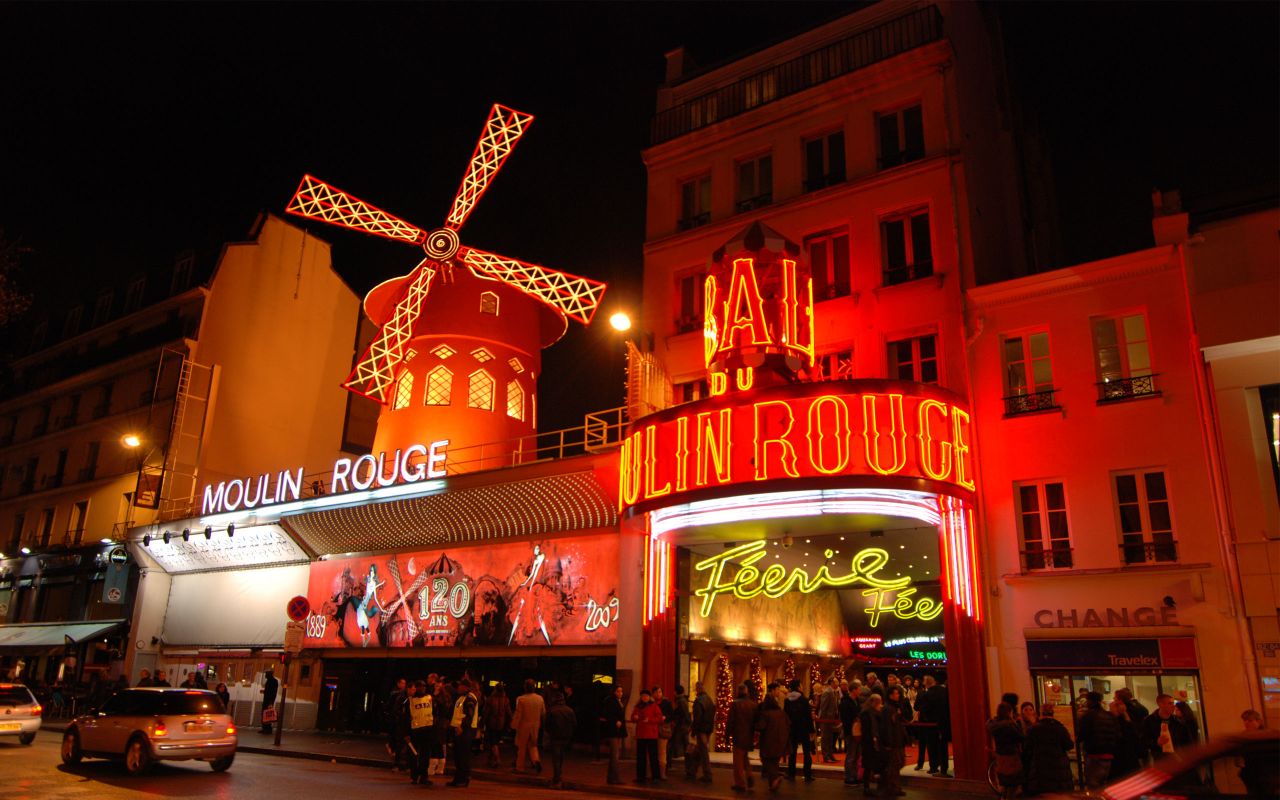 The Moulin Rouge is a French Cabaret that opened in Paris in 1889. Located at the bottom of Montmartre hill, the Moulin Rouge offered over the years different kinds of shows. At first the Moulin Rouge was a music-hall where people discovered the dance Cancan. That dance was invented in England but they found it too “shocking” there but it was a huge success in France! The French Cancan is a dance for woman only about doing the split and showing of the lace of their dresses. The popularity of the Moulin Rouge came and went over the time but the place always stood for offering a great and glamorous show and atmosphere. The show they offer now is a beautiful dancing and singing show with shining costumes and stunning choreographies called “Féerie” (Fairy).

Seeing a show at the Moulin Rouge is a very popular thing to do in Paris but before going here are a few things you should know. 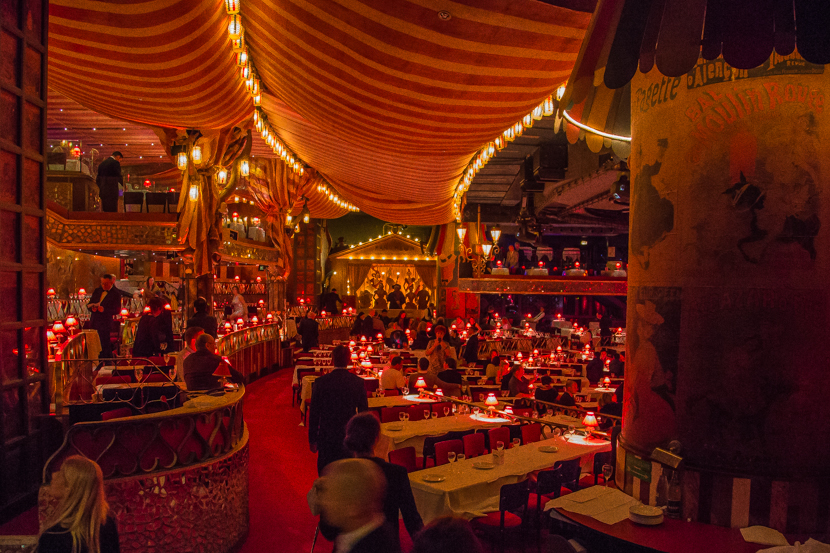 Visiting the Moulin Rouge isn’t only about seeing the show; you can also have diner there. Going to the Moulin Rouge you have different options to choose from. The dinner and show option is about having a French dinner in the beautiful room of the Moulin Rouge before the show. But you can also choose to only have a cup of champagne during the show or nothing at all and just enjoy the show. That decision will have an influence on the time you will go there, the dinner and show option being the first to start in the evening. They have two representations each evening, one starts at 9 PM, the second at 11 PM. 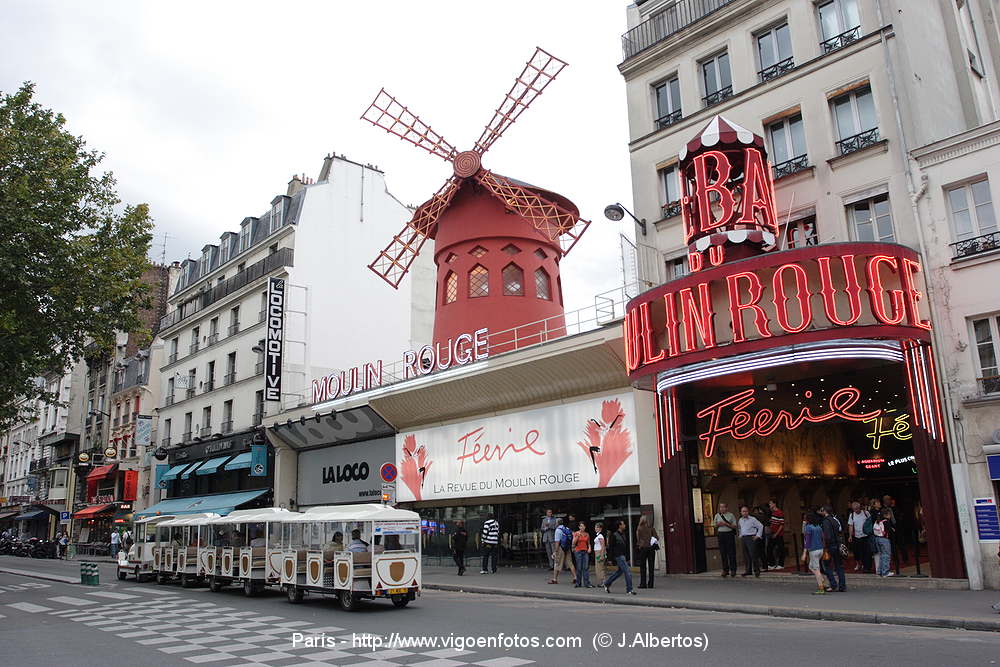 The Moulin rouge is a fancy experience. So depending on the kind of evening you choose to have there and the day you want to go, the prices of the tickets will be different. For the dinner and show the prices are between 190€ and 210€ per person, it can be a little bit more depending on the menu you choose. Then for the show only the tickets prices are between 87€ and 120€, if you want to have a drink while watching the show you need to add an extra 10€ to that price. They also offer VIP tickets that came with a few extras and children reduced tickets and menu.

Also, for such an evening, you will have to dress up! Black tie outfit and dresses are the appropriate outfit to go inside the Moulin Rouge. Sport shoes and sport outfits, flip flap and shorts are forbidden.

About children going in the Moulin Rouge, they will be accepted if they are older than 6 and dressed properly but the show can be seen as inappropriate for young children. The Moulin Rouge is a cabaret, so the dancers will show skin, a lot of skin. The show isn’t strictly unsuitable for children but they need to be prepared of what they will be seeing.

When the show is over and you will want to go back to the place you are staying it will be 11 PM or 1 AM depending on which show you watched. The neighborhood the Moulin Rouge is into is considered the “red” neighborhood of Paris and concentrates a lot of adult oriented places. So you might be a little surprised by the population of the area after getting out of this glamorous show. To go back home you can use the subway, the closest station is Blanche on line two. Otherwise you can call for a cab or a Uber to take you home. 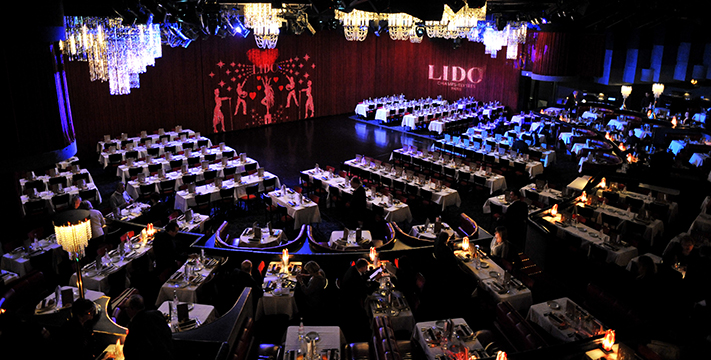 But the Moulin Rouge isn’t the only cabaret in Paris. Not far from it you can find La Nouvelle Eve, a cabaret where you can also have a dinner and show experience but which is a little bit cheaper. Another famous Parisian cabaret is the Lido. There you can also have a glamour show with beautiful costumes, singers and dancers after having a fancy diner. But unlike the Moulin Rouge they have a lunch offer as well; so in the Lido you can have lunch and then see their show at 3 PM.

Visiting the Moulin Rouge will be one of the highlights of your trip to Paris because for one evening you get to come back into the most popular hours of the cabaret. Inside the beautiful dining room of the cabaret, with its old posters and glamour atmosphere you will go back to the time when Mistinguett or Edith Piaf performed there. And watching the magnificent show you will be transported to a magical world from which you won’t want to come back.